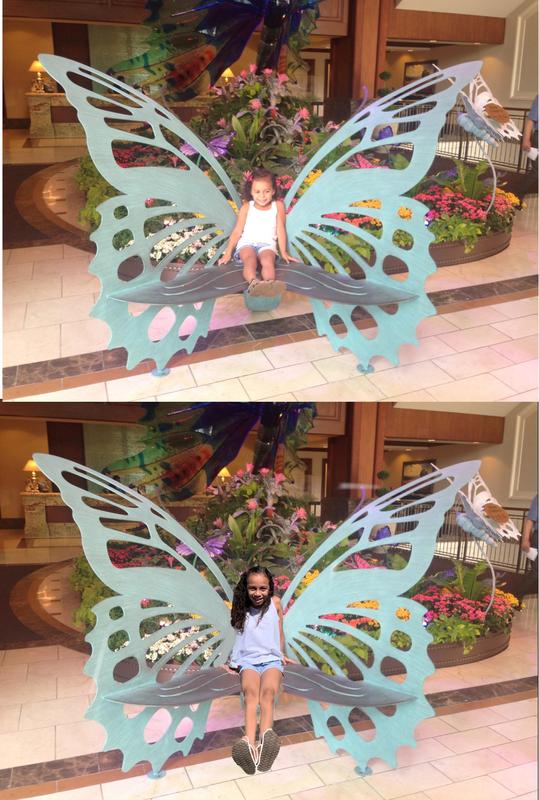 Where Has the Time Gone?

Spirit Week is upon us, and it's a time for us to stop a moment and reflect on how far we've come and the amazing growth we're so privileged to witness at Chapel. As they say, "Time marches on," and hopefully we are moving forward with the parade. Although we try to hold on to our special memories, sometimes it feels as though, we blink and everything, everyone has changed. It seems like only yesterday that we welcomed the Class of 2020 to their kinder class. These pictures of some of our students through the years, remind us of our past and give us hope about tomorrow. God bless CCS!
Read More » 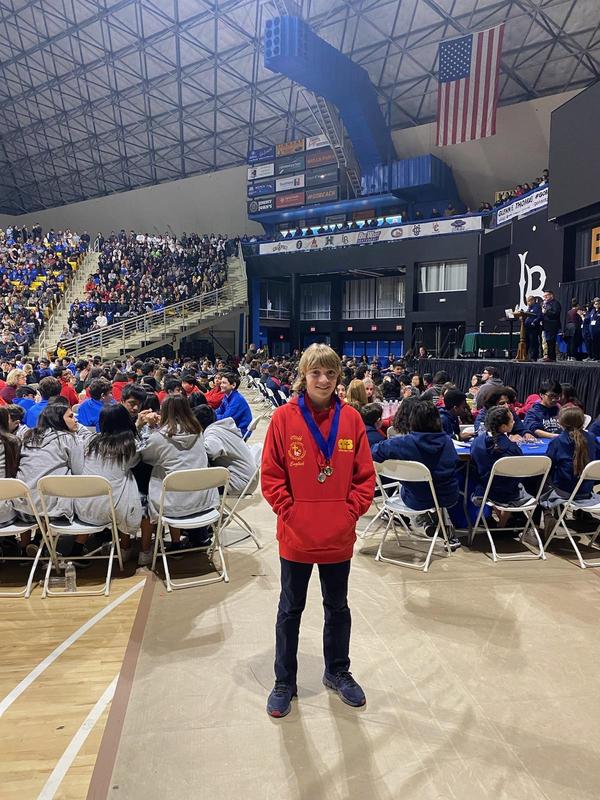 Congratulations to 7th grader Cliff Connors for coming in first in English at the Los Angeles Academic Decathlon Finals and finishing with the highest score in the entire nation. Cliff took the top honors in the nation in English, and 8th grader Joaquin Recinos came in 2nd in the nation in his event, social studies. In addition to preparing for their events, these two, young men maintained "A" Honors in their regular subjects and became masters of logic. The diligence, teamwork, and effort they showed is a credit to them and their families. This is the first time in the school's long and envied history that members have earned national honors. Their coaches and the entire CCS family could not be prouder. We commend them for their success and thank them for their dedication.
Read More » 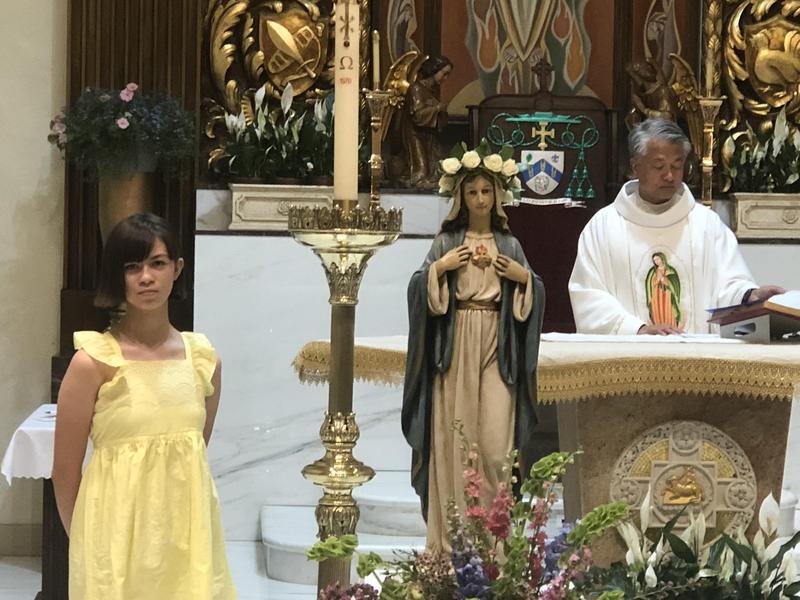 May Procession Still Goes on at Chapel!

For the first time in the history of our little school, the May procession was held in a church with fewer than ten people in attendance. The good news is that another 200 people, at least, were experiencing the event from the safety of their homes. Jordan del Pozo was given the honor of crowning the Virgin, so she was present at church with her father Roman del Pozo, Miss Kipp, Father Truc, Ms. Fontan, and Mr. Ponce. Mr. Hilley provided beautiful musical accompaniment from his home. Student readers led prayers from their homes as well. Some had chosen virtual backgrounds that added to the beauty and spirituality of the event. Miss Kipp opened the ceremony and set the tone for the event. Jordan looked beautiful in her pretty, yellow spring dress. Mr. del Pozo filmed her as she entered the church and approached the statue of Mary. She adorned the Virgin with a lovely, floral crown. Beautiful hymns filled the church, and Ms. Mitchell made certain that the prayer leaders were featured on Zoom as they helped us pray the Rosary and shared each Sorrowful Mystery. Father led the congregation in Pope Francis's Prayer During the Coronavirus Pandemic. It was a powerful, moving event and proof that people can be socially conscious, prayerful, and present in community at the same time. God bless the group that made this happen. We are blessed to be a part of such a creative, resilient, supportive, loving community. Chapel school is not only the Diamond of the Diocese but the Little Engine that Could!
Read More » 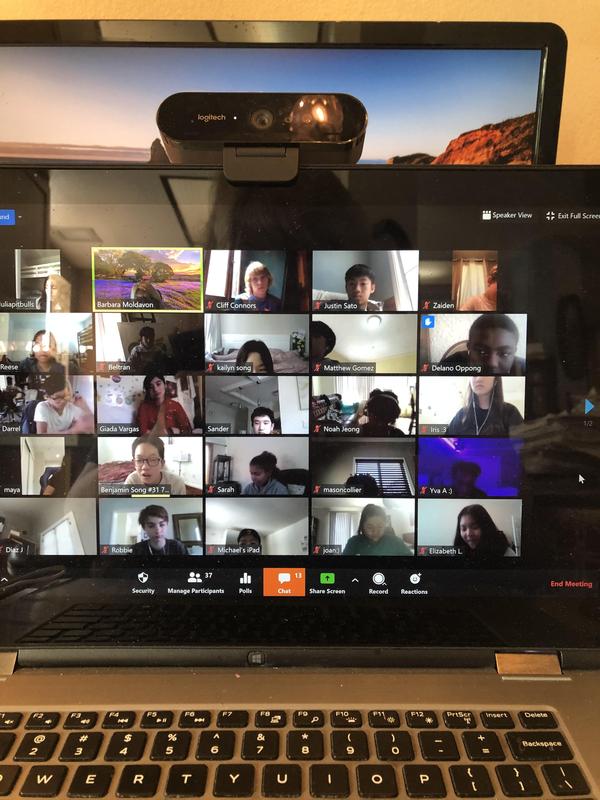 Students are adjusting, parents are supporting, and teachers are delivering. Zoom is our new classroom, but learning continues and spirits are high at Chapel. The words, "It takes a village" have never rung so true. Everyone has been challenged with our new learning model, but so far we give our school family a big "A" for effort. Miss Mitchell took the lead with Zoom and Google Classroom, and we owe her a big debt of gratitude for the hours she put into the scheduling alone. We are proud to be able to continue classes including Spanish, honors math, reading resource, and computer as well as regular classroom lessons. Teachers are up early and open for office hours at 7:30 each weekday morning. Students are presenting projects and sharing their pets in real time during "Show and Tell." Every day we are proving that where there is a will there is definitely a way, maybe many ways. Once again, Chapel steps up to the challenge and shows her resilience and resolve. God bless CCS! Stay safe and well, Friends.
Read More » 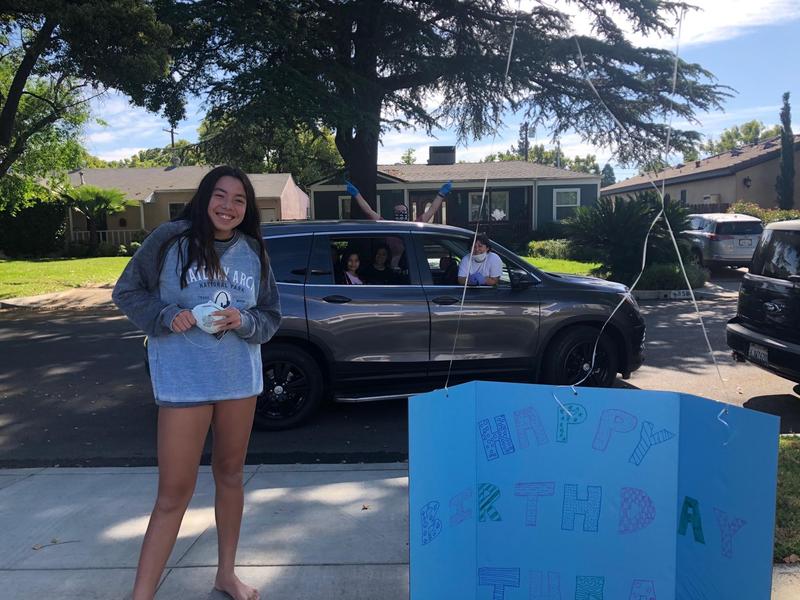 Mr. D. and Family to the Rescue!

What did you do this Sunday? Most of us probably wouldn't have a very interesting response to that query given the current shelter in place policy. Mr. del Pozo's answer would be, "I drove for six hours delivering math books to students and bringing birthday cheer to some 8th graders." (All the while, of course, adhering to proper social distancing guidelines.) But don't worry; he wasn't alone. The whole del Pozo family packed into the car and participated in a birthday drive-by for 8th graders Althea and Izzy. Then it was off to Korea Town, Park La Brea, Hollywood, and Culver City delivering math books to Chapel students. The family was greeted with smiles and "Thank-yous!" from parents and students alike. We are blessed at Chapel to have such devoted teachers and supportive families. Stay safe and God bless CCS!
Read More » 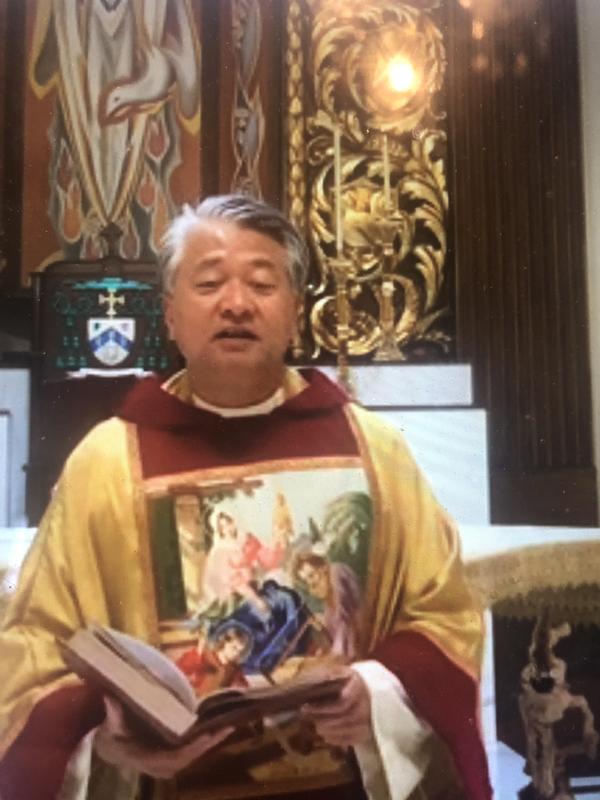 Father Truc and Our Church Leaders Are Here for Us Every Day in Every Way!

Father Truc has always been a strong source of support for our school family. He is loved by students and teachers alike. Now more than ever, he is available to us and praying for us. Before the Easter break, he visited our classrooms during Zoom lessons. We can find his leadership and inspiration in the online serviced the church streams live daily. His sermons have been the inspiration we need during these difficult time. God bless our parish and God save our school. On line classes resume Monday, April 20, 2020.
Read More » 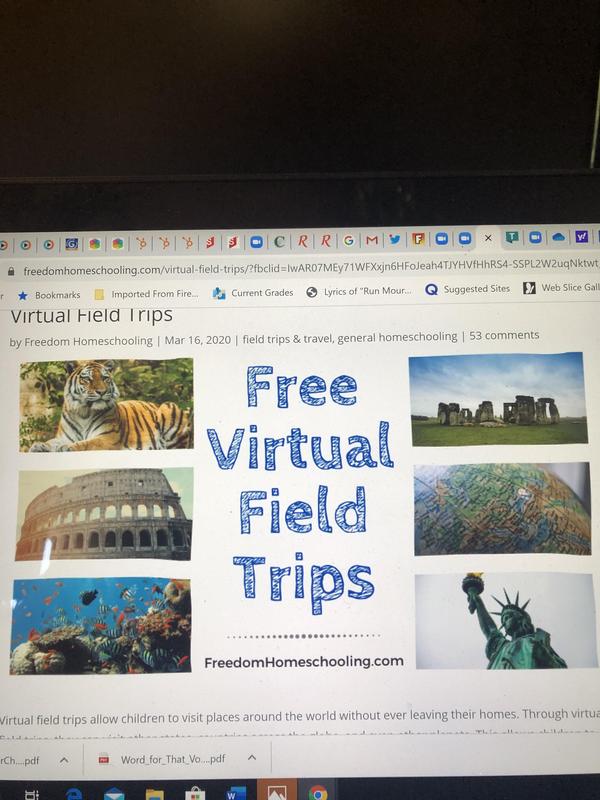 Chapel Down but Definitely Not Out

Teachers and students are rising to the occasion and making the best of the new distance learning model. From Spanish, to honors math, to reading resources, to computer, to homeroom teachers, everyone is committed to delivering a quality education to our students. In the process both students and teachers are becoming Zoom experts. Mr. Ponce is at the school every day working, cleaning, fixing, and polishing. Teachers have offices hours every single morning from 8:00 to 8:30 to help students and answer parent questions. Everyone in the Chapel family is doing their part to keep our students engaged, learning, growing, and achieving, We are thankful for the strong, steady leadership of Father Truc and Miss Kipp. God bless our parents for their support. We are in this together, and we'll come out of it together-Chapel Strong!
Read More » 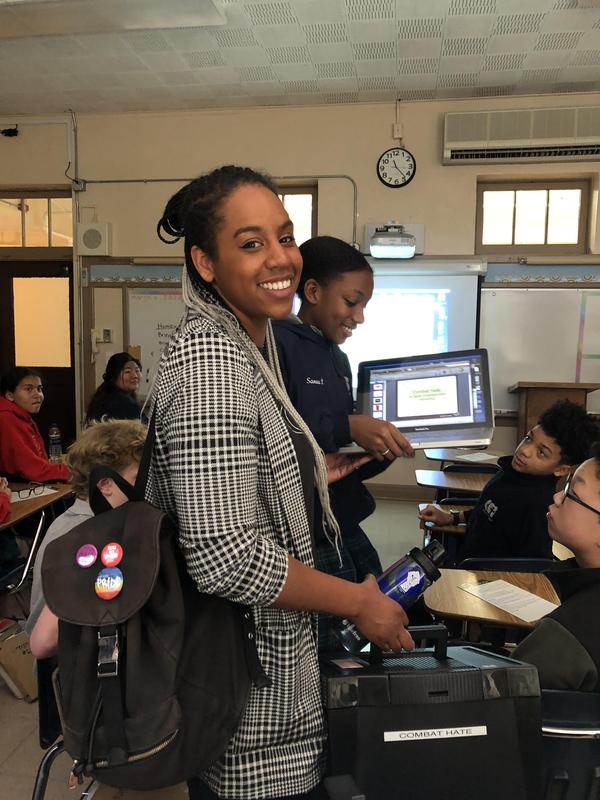 On Thursday, March 5th, Taylor Wilkey, a 2005 Chapel grad, returned to our school to share a very important presentation from the Museum of Tolerance. The program is entitled "Combat Hate: A Digital Empowerment Workshop." The interactive presentation was an eye-opener to the students in junior high who were engaged from the minute the lesson began. Thank you to Taylor, her mother, the Museum of Tolerance, and Miss Kipp for making this happen. The students were provided important information that will help them make good decisions while on the Internet and beyond.
Read More » 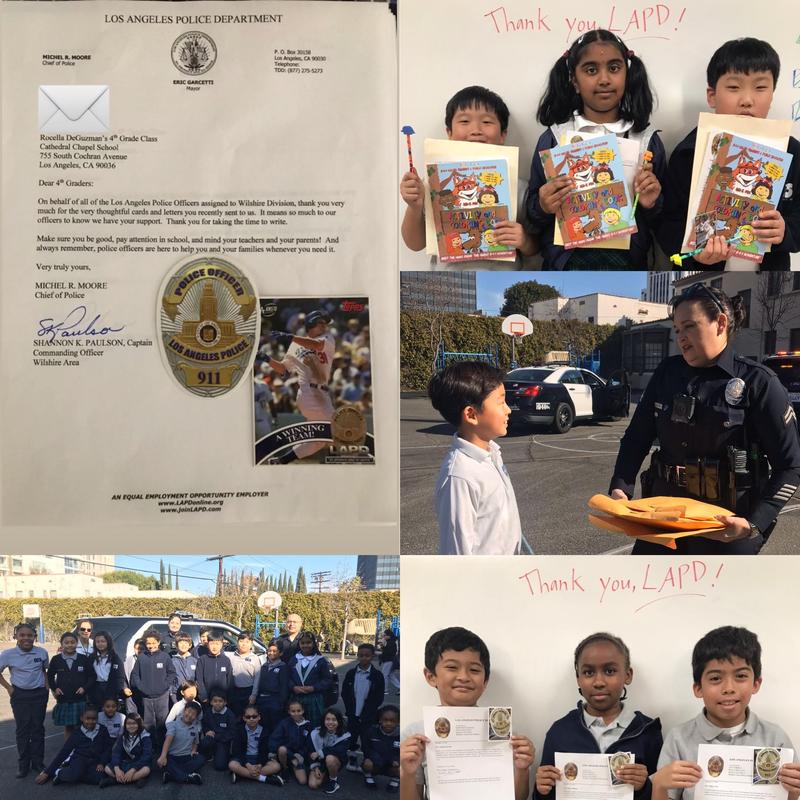 LAPD's Wilshire Divison has certaingly gone above and beyond to show apprecciation to the classes who reached out to salute the local heros on Community Appreciation Day during Catholic Schools' Week this year. Students in grades two, three, and four made cards and sent an assortment of edible goodies to thank the officers for their service and bravery. The officers were so moved by the students' gesture that they came to the school with their patrol cars, parked in the yard, and visited with the students. If that weren't enough, every single fourth grader also received a personal thank-you letter from one of the police officers. Chapel is lucky to be protected by such kind and caring men and women. God bless the LAPD.
Read More » 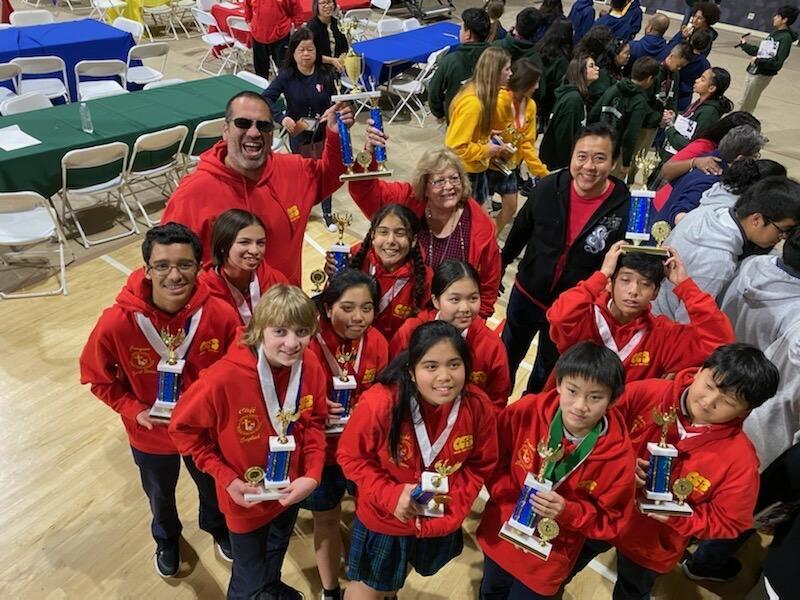 On Sunday, March 1, 2020, 93 Los Angeles Archdiocese schools competed for the honor of representing their school at the AJHD state championship. The top two schools represent L A at the event. Chapel came in as close as a school could possibly come without earning that privilege; the team placed 3rd in one of the most exciting competitions in the program's 30-year history. Chapel placed 2nd in Logic and 3rd in Super Quiz. In the individual events, the team placed 8th in Fine Arts, 7th in Literature, 4th in Science, and two students placed 1st in their events. Cliff Connors (7th) will compete at State in English, and Joaquin Recinos (8th) will compete in Social Studies.
The team had an amazing run this year; their coaches and fans couldn't be prouder. Of many memorable moments, one that was an honor to watch was when all the 93 teams were announced. Only one team clapped for and acknowledged each and every school. That one team was Chapel. They competed with honor and showed what Chapel is all about.
Only two members of this year's team are 8th graders. Can you imagine next year's team? A special and sincere thank you goes out to Miss Kipp and the faculty and staff who worked all day at the event, so Chapel could compete and to the parents of the team members for their incredible support during the entire season. God bless our team and God bless CCS!
Read More »